The Wisdom of Grandparents 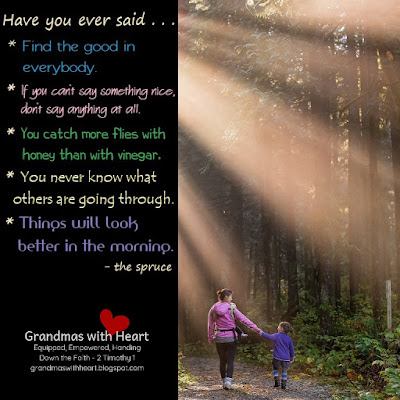 Grandparents and wisdom; the two often go together. One of the ways Grandparents share their wisdom is through a favorite "sayings" they tend to use with their grandchildren. There is a reason old sayings, such as these, are handed down from one generation to the next - they tend to be wise sayings.


And many of these saying actually reflect Biblical truth - for example, "You catch more flies with honey than with vinegar" and "If you can't say something nice, don't say anything at all"; both teach the same truth we find in Scripture, "Let your conversation be gracious and attractive so that you will have the right response for everyone." from Colossians 4:6

Yes, as grandparents we do tend to hand down wise sayings - which is fine, just be sure we are purposeful about also handing down the truth of Scripture!

What old saying did your grandparents say to you - and do you find yourself saying the same thing to your grandchildren?