Use Humor to Make the Ride Smoother 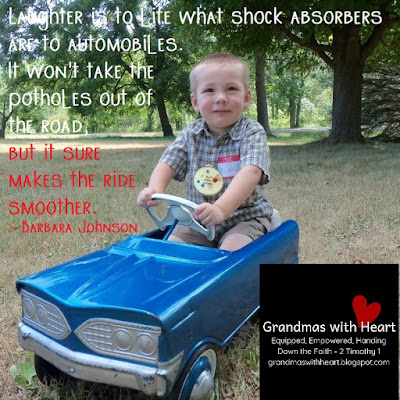 So, just for a touch of fun, consider sharing with your grandchildren some actual laws in some of our states. For example, did you know . . .

Well, these are just a few funny laws I found on the Reader's Digest website. Email, text, or call your grandchildren and share a few, then consider challenging them to find a silly law on-line each day for the coming week - ask them to let you know their daily funny law and tell them you will do the same. Just a simple way to enjoy some humor over the coming days/weeks as we socially isolate.

The Bible tells us God created us in His image - since so many people enjoy humor, it is reasonable to believe God enjoys humor as well . . . after all, He did create the platypus - an animal with a beaver tail and duck bill! Look for and find humor - share it with the ones you love - it won't take the potholes out of the road (take away the challenges with COVID-19), but it will make the ride smoother!