Fun Facts about Grandparents & Why What We Do Matters! 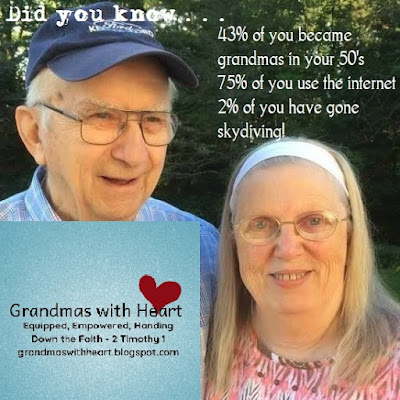 I sincerely believe we grandparents need to focus on handing down a heritage of faith to our grandchildren. I believe with all my heart it matters for us to be intentional when it comes to handing down our faith to these grandchildren given to us by God. There are reasons I believe this - some of them are . . .

Some interesting facts about grandparents here in the USA show the impact we are able to have. Consider the following (from Grandparents.com and the US Census) . . .
We grandparents, for the most part, are highly invested in our grandchildren and want to hand down a heritage of faith to them; many just do not know how to do this. They need to be supported, encouraged and equipped. When we are, our grandchildren will benefit as they are encouraged to know, love, and walk with Jesus.

What are you doing to hand down a heritage of faith to your grandchildren? What do you need to be supported and encouraged to do this?