The "Green" Will Return - God Will Bring them Back! 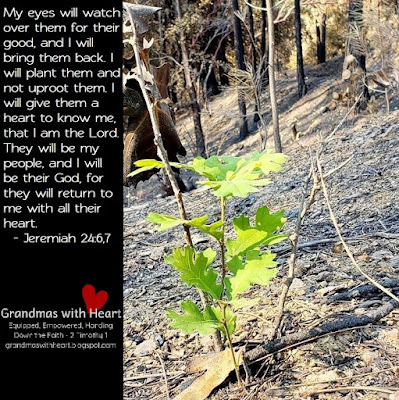 This past Summer and continuing into the Fall, so many people in our country have experienced loss due to wild fires. As I write this, nearly 12 million acres, yes, twelve million acres, have gone up in flames. More than 10,200 homes and other structures have been lost. So far, 68 people have been injured and 37 people have died. There is so much damage, grief, and loss.

I do not live out West where there fires are taking such a toll, but it is where my husband is from, we met there, and his family live there. Two years ago on July 23rd a truck pulling a trailer West on Highway 299 between Redding, California and the California Coast ended up with a flat tire. This may not seem like a big deal, just a normal happening, but when the rim of the tire scraped on the road, sparks were thrown into the dry grass along the side of the road resulting in the Carr Fire. This monster fire ended up burning just under 230,000 acres, took more than a month to extinguish and is considered to be the seventh most destructive fire in the recorded history of California, as it destroyed just over 1600 structures. Seven people also lost their lives in the Carr Fire.

As I mentioned, forty years ago I met my husband east of Redding, California; across the valley from where the Carr Fire burned. He grew up in the Redding area, we lived there a few years with our children when they were young and most of my husband's family still live there. I love the Redding, Shasta County area of California; in my opinion it is one of the most beautiful places on the face of the Earth. Two years ago my heart broke as from Michigan we watched the Carr Fire burn; the photos of enormous firenados, burned neighborhoods and the destruction of the beautiful forests which covered amazing mountains were now so difficult to see. We wondered if the beauty of the mountains around Whiskytown Lake and the Trinity Alps would be something we, our family and friends in the area would ever see again in our lifetime.
But then I saw photos on the Whiskytown National Recreation Area's facebook page which filled me with hope. "Green" is returning! Among the burned trees and ashes, Oak trees are sprouting! When asked by someone on facebook if the trees survived or would return, the Forest Rangers said; "Time will tell. Some species, such as cedars and ponderosa pines have thick bark to protect them from most fires, and should fare pretty well. Other species, such as knobcone pine, require fire to re-seed themselves although the existing trees are rather vulnerable to fire. Oaks, big leaf maples, and other deciduous trees are already experiencing re-growth from the roots where they've been burned down."
God knew what He was doing when He created the trees which cover the mountains out West! He knew fires would burn through from time to time - whether from a flat tire and sparking rim, lightening strike, or other cause. God made some trees with thick bark to protect them and others to re-seed and grow anew because of the heat from fire. Even though it was difficult to watch the fire burn and is heartbreaking to see the burned areas across the West now, God has an eye for the future and He knows what He is doing!
The Carr Fire has many parallels to life for us and our grandchildren (as do the fires burning today) . If we let our walk with God go "dry", it will only take a small spark - facing a difficult situation without relying on God or allowing ourselves to be too influenced by people who are not walking with God to "set our lives on fire" and leave us with damage to our lives, and the lives of those near us.
But God had an eye to the future and knew what He was doing when He created us, too. He put us in families. God planned for families to be the primary method through which confident faith is handed down to children. God planned for grandparents to have purpose and gave us the job - and great joy - of handing down confident faith on purpose to our grandchildren. He provided a "thick bark", of sort, in families, in grandparents, as just one way to protect and bring back those we love who are too "dry" and "catch fire".
When you see "fires" burning in the lives of those you love, do not lose hope. Yes, it is difficult and painful to watch as they make choices which bring destruction to their lives, (just as it is to watch as the West burns today) but God put them in families and He offers His grace. He promises to plant, give new hearts and to bring back those who wander.
Take heart, the day will come when you will see "green signs of life" and one day, those you love will show life once again.
#grandmas #handingdownconfidentfaith #itmatterswhatwedo #grandparentingonpurpose
at September 30, 2020