The DNA of Grandparents & Parents who Hand Down the Faith 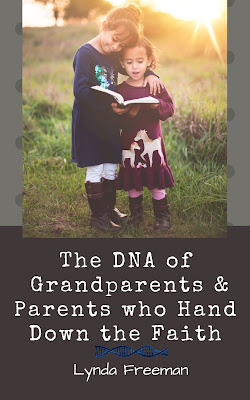 One of the things I hear from grandmas, grandpas, and parents is they do not know how to hand down confident faith. One way we are able to learn how to do this is through books - so today I thought I'd share an excerpt from my book - The DNA of Grandparents & Parents Who Hand Down the Faith -

Jeremiah 33:2, 3 - This is what the LORD says, he who made the earth, the LORD who formed it and established it—the LORD is his name: “Call to me and I will answer you and tell you great and unsearchable things you do not know.” (emphasis mine)

You might think; “Well, Jeremiah was one of God’s prophets, so of course he thought God heard and answered his prayers. How could he be a prophet – or at least a very effective one – if he didn’t?” True, Jeremiah was one of God’s prophets, but at the time he wrote this, he was imprisoned in the “courtyard of the guard” and just a few chapters later, we find he was thrown into a hole in the ground, a well, where they put him because he spoke God’s messages, God’s Word, to the people – and they did not particularly like God’s messages. If anyone ever had a “reason” to feel like God was not hearing them, certainly Jeremiah would have been one such person. He was, after all, an actual prisoner at the time he wrote those words.

You are able to get the print version of the book on Amazon and in our bookstore and the digital/pdf of this book is just $5 at this link https://grandmaswithheart.blogspot.com/p/book-store.html
Look what some people are saying about this book -
I’m excited about your book and the help you’re wanting to give parents and g-parents. I hope your book gets into the hands of tons of people.
Tim Kimmel Dad & Grandpa Author, Speaker, Founder – Family Matters
I love the idea of passing on spirituality like DNA. It means we must have it first and then transmit it to future generations. This book will stimulate the thinking of many parents and grandparents!
Dr. Scott Turansky Dad & Grandpa
National Center for Biblical Parenting
This looks fantastic! I really enjoyed reading it. Your words inspired me to continue sharing my faith in God with my children and grandchildren. Thank you for using your gifts in this way.
Janae Dean Mom & Grandma,
Theater Director for her company,
Children’s Creations Theater in Grand Rapids Michigan. www.childrenscreations.org, song writer for her husband Wayburn Dean, prison concert ministry where Wayburn sings and Janae speaks, sharing the good news of Jesus with men behind bars. www.insideprisonministries.org